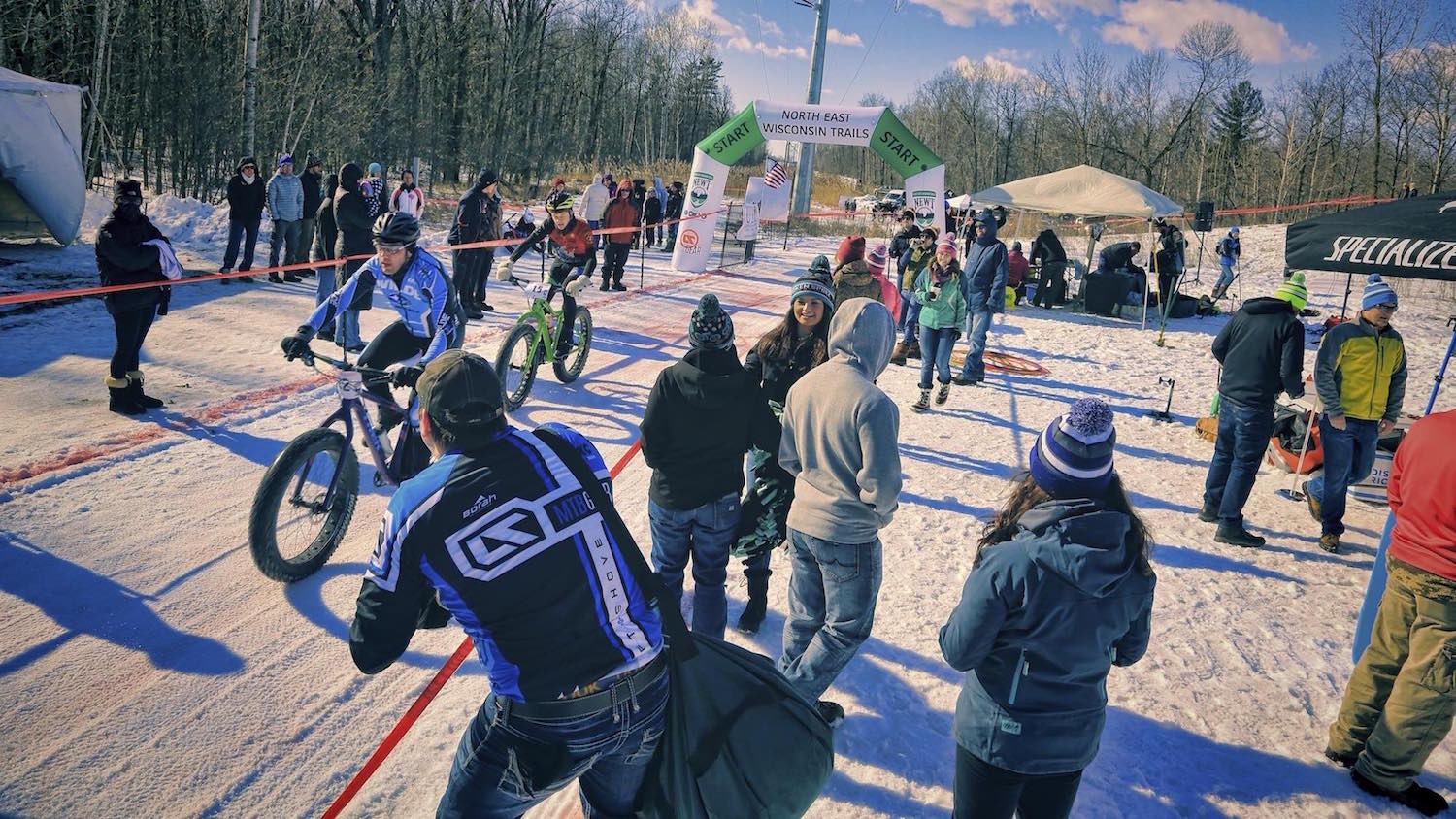 February 12, 2017 saw the second running of the Fat Cupid Classic fat bike race in Appleton, Wisconsin. For the second year in a row, the race was held by the Northeast Wisconsin Trails organization at Art Lecker Park, and sponsored in part by our good friends at the Recyclist Bicycle Company of Kaukauna. Check them out if you're ever in need of a fat, or non-fat bike. We took a couple cameras, and a selection of lenses, to get some shots of the action.

Cyclists have a natural affinity for coffee, and fat tire cyclists have a natural affinity for that other ancient brew, the one that's cold, amber and comes in cans in its cheap form. There was beer aplenty on hand for spectators and, probably more importantly, for the racers. Matt Fisher, one of Recyclist's ace technicians (and the guy to see if you need some service on your RockShox), played a key role in helping handoff cold brews to racers coming through the start/finish.

Fortunately, the weather was somewhat warmer than usual for Wisconsin in February, so the beers didn't turn immediately into beercicles. Although, that's a winter delicacy in some parts of the state.

Meanwhile, out on the course, the warmer temps made the snow somewhat wet and slippery. A couple of corners challenged rider skills, and one fast downhill had some competitors using the hike-a-bike technique. One of those who took that hill a bit fast found out first-hand that wet, slick snow and gravity can combine under the right conditions to defeat even 5-inch wide fat bike tires. Their tenacious grip may be prodigious, but it isn't infinite.

There was enough action that we filled a memory card in the 5D. That camera, as usual, performed again exactly as you'd expect from one of the best all-around cameras ever made. Which is to say combined with great Canon "L" lenses, we were happy with the results. We also packed the Canon XC10 for video work. At last year's Fat Cupid, we shot video with the XF300 3CMOS camcorder. Then, the weather was cold enough that it froze the XF300's battery half-way through the race. No such problems for the XC10 this year with temps above freezing. And, this year, we shot the video highlights of the race in 4k.

A great time was had by all, it seems, racers and spectators included. Here are some photos to prove it (or to just enjoy if you didn't make it to the race).

(All images copyright Behreandt Visuals. They are not free to reuse. Please contact us for requests.)